Yesterday, was the USM vs. UCF football game- and we WON!!!!  Woohoo!!!  I was doing a little happy dance all day.  I love the fact that we won, especially since it was against UCF (whom I hate with a passion) and so many of my colleagues and students were talking trash all last week.  I kept my mouth shut, knowing that we were down a few key players and I didn’t want to have to eat my words.  All of these things make the victory sweeter- I wasn’t trash talking last week (and the UCF fans were), we were down two key players (one of which is our star running back), it was their homecoming, we got to tailgate, the tickets were free and well, we won!!!  I think this calls for another WOOHOO! I think that I will leave my header up for a little longer to enjoy the sweet taste of victory and I am going to be sporting some Southern Miss apparel to school tomorrow, just to rub it in.

I have attached a few pictures from tailgating.  Jamie’s family- Mary Sue, George, Uncle Mark, and Aunt Holly all showed up at my house Saturday morning wearing Southern Miss shirts, it was a great surprise!  We looked very official when we were tailgating.  We had a big crew out at our site, the four mentioned above along with Aunt Nancy, Uncle Bob and Grandma who joined us for the food and pre-game festivities.  Nan and Jeremy were able to join us as well, so I was not the only true Golden Eagle among us.  Nan was a real trooper, she sat through the whole game and made the walk to and from the car with little complaint (which I am not sure that I could have done).  Leyton, from what it seemed, enjoyed them game too and I am sure that it made his Daddy proud to know that he attended his first Southern Miss game while still in the womb. 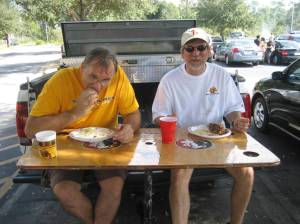 Parents to be and fellow Eagles

Me and the beautiful Mama

Us at the game, after the sun finally went down.
On another unrelated topic, yesterday was our anniversary.  “Which one” you may ask since we got married in July.  Yesterday was the three year anniversary of our meeting.  Jamie and I went on what you can call a blind date to Ker’s Wing House, it included Jamie’s dad George, Lisa and Fernando Vazquez a friend/colleague of mine and her now husband.  Lisa was the other half of our introducing duo along with George; actually, she asked me one day at school (probably during my planning period which I quite often spent in her office) if I would be interested in meeting a guy. I said “Who?”, kind of sceptically and she replied “Do you remember Mr. Perreault?” (dear old dad was an Assistant Principal at UHS when I was there) and I said of course.  She said well his son, Jamie.  I jumped at the chance, I knew he would be a catch and well, the rest is history.  Actually, what I really said was “Sure, what could it hurt- the worst that could happen is that I don’t like the guy and you never know I could end up marrying him.”  Well, little did I know I would marry him- a mere nine months later.  So every year on the 8th we go back to celebrate in style, I have included a few pics from our stop there too- enjoy!! 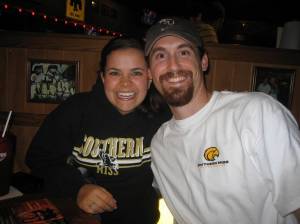 2 thoughts on “Anniversary and a USM win!”

This site uses Akismet to reduce spam. Learn how your comment data is processed.